“And of His signs is that He created for you mates from your own selves that you may take comfort in them, and He ordained affection and mercy between you. There are indeed signs in that for a people who reflect”(30: 21).

One of the main objectives of marriage from the Islamic point of view is for the couples to find peacefulness. Peace is the very result of considering Allah in mind in every second of life. Being compassionate is a skill that couples should develop in order to make a better life. Islam aims to teach this skill to its followers and all other human beings.

Prophet Muhammad (PBUH&HP) said: “when a man expresses his love to his wife, the effect of such loving words will never fade from her heart”.

These words were uttered by the Holy Prophet (PBUH&HP) in a society in which women were not considered to deserve the least human rights. Moreover, it shows that Islam believes in the importance of expressing feelings to strengthen couples’ relationships and the idea of being compassionate.

Our fourth Imam, Imam Sajjad (AS), said: “It is your wife’s right on you to know that she brings calmness to you and she is a gift from Allah. Then, cherish her and treat her with kindness and tolerance”.

These sayings show the special attention of Islamic leaders to family and its role in the formation of society. It can be concluded that regarding the issue of being compassionate, building a peaceful society depends on having healthy and competent families.

The motto of Islam is, “First build your personality, then your family and finally your society”.

Imam Sadiq (AS) said: “The more one increases his/her kindness to his/her spouse, the more his/her faith will increase”.

What is the belief behind this large amount of recommendations on being kind and expressing feelings? How can Islam be blamed for promoting violence?

To finish this article, It would be interesting to narrate a short story from the early Islamic era:

Prophet Muhammad (PBUH&HP) ennobled one of his loyal companions, named Sa'dIbnMa'az, in his funeral. Watching this scene, his mother said: “Oh my son, enjoy heaven”. Prophet (PBUH&HP) said to Sa'd’s mother: “Do not prejudge. Your son is suffering in his tomb”. Other companions asked in wonder, “why is he suffering in his tomb while you respected and ennobled him this much? He added because he was bad-tempered with his family.

Allah is Unique in Kindness. Kindness is a sign of wealth for which you sometimes do not need to spend a penny, but it is more valuable than large amounts of money.

What Are the Rights of Parents in Islam? Part 1

A newborn baby who opens his/her eyes to this world is tiny and weak at first; like a rosebud that appears in spring. It is then a burden upon the parents in Islam to take care of this fragile gift, like a compassionate gardener, until the baby grows up and flourishes.

Knowing that our parents as a team have provided for all our needs till we grow up, we naturally respect them. But this becomes of paramount importance when we come to know that how strongly Islam emphasizes parents’ rights and respecting them.

The Importance of the Rights of Parents in Islam

Islam has placed such a strong emphasis on the parents’ rights and worth that showing gratitude and being grateful to them are commanded to, right after Monotheism (Tawhid) in several verses of the Quran [i].

In the nineteenth chapter of the Quran, Surah Maryam, where some moral virtues of Prophet Yahya (PBUH) are mentioned, it is said that he was “good to his parents” (19:14). We also read that Prophet Jesus (PBUH) introduces himself as the servant of Allah who: “[made me] be good to my mother” (19:32).

In a narration, Imam Sadiq (AS) is asked about the best deeds; Imam (AS) answers: “Prayer (Salat) in its stipulated hour, goodness towards parents and Jihad in the way of Allah” [1]. Bringing respect for parents, after prayer (Salat) and before Jihad indicates the high-value Islam places on caring for parents.

In another narration from Imam Sadiq (AS), doing good to parents, whether they are among believers (Mu'min) or disbelievers (Kafir), is known as a duty that no one can be exempted from [2]. He also said that: “Whoever satisfies the parents has satisfied God; and whoever annoys them, has annoyed God” [3]. 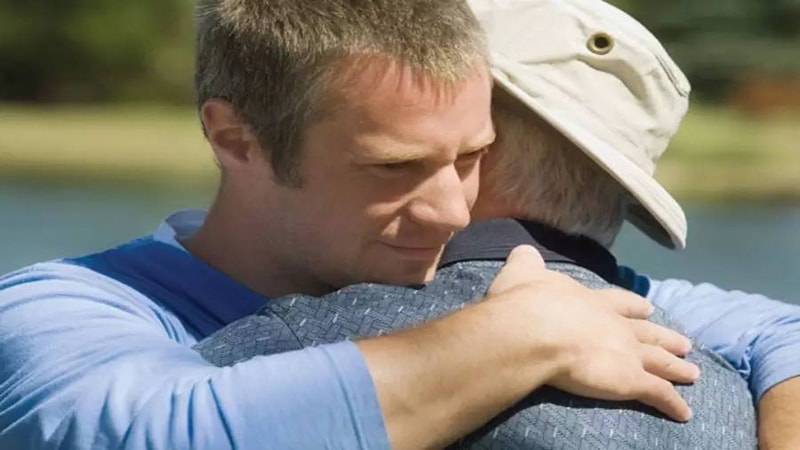 The Rights of Parents in Islam

Respecting the rights of parents in Islam, whether alive or dead, is highly advised. These rights include:

Obedience to parents as far as it is not against God’s orders or unjust; a situation that one is forbidden to obey his/her parents is: “if they urge you to ascribe to Me as a partner that of which you have no knowledge, then do not obey them”(31:15). But even in this case, one should treat them kindly: “Keep their company honorably in this world” (31:15). Another case where parents’ disobedience is allowed, is when they invite to something unfair: “Be maintainers of justice and witnesses for the sake of Allah, even if it should be against yourselves or [your] parents and near relatives” (4:135).

Respecting them deeply, looking at them with affection, being humble and talking to them with a gentle voice and kind words: “Keep their company honorably in this world” (31:15); “[He has enjoined] kindness to parents. Should any of them or both reach old age at your side, do not say to them, ‘Fie!’ And do not chide them, but speak to them noble words” (17:23); “And lower to them the wing of humility out of mercy” (17:24). In a narration from Imam Reza (AS), saying “Fie” to parents is believed to be the last thing that bothers them; hence, anything greater than that must be definitely avoided. Of other narrations in this regard are: “If your parents upset you, do not react badly; if they hit you, do not react the same but tell them ‘May God forgive you’”;  “… do not look at your parents except with a kind look, do not raise your voice on them, nor your hands over their hands, nor walk further than them ” [5]; “whoever looks at his parents with hatred, even if they oppress him, Allah will not accept a single prayer from him” [6]; “Insolence includes a man’s looking at his parents with a sharp gaze” [7].

Being humble regarding parents: “Lower the wing of humility to them, mercifully” (17:24). This humility must arise from deep in your heart and originate from your real affections.

Treat them well: "When We took a pledge from the Children of Israel: ‘Worship no one but Allah, do good to your parents” (2:83). This verse of the Quran reveals that everybody, whether Muslim or not, must treat the parents well.

Imam Hussain (AS) was asked about the meaning of treating well in this verse. The answer was briefly that it means to treat them with ultimate compassion, to show them great respect during their companionship, not to oblige them to ask for what they need but provide them before they mention it [8]. One of the best deeds in Eid al-Adha is said to be doing good to parents [9].

Being beneficent to parents is a duty upon children when they are alive as well as after they pass away. Imam Sadiq (AS) said: “What prevents you from doing good to your parents? Pray [ii], donate, perform the holy pilgrimage (Hajj) and fast (Sawm) in their place because God awards you a lot in return for your good deeds” [10]. It is also said that: "Whoever visits his parents' grave on Fridays, will be forgiven and will be among the virtuous" [11].

Silatur-Rahim or preserving family ties is not limited to visiting relatives, but also includes trying to satisfy their needs and strengthening emotional bonds with them. This depends of course on the situation of each member of the family; one might require money while the other has emotional needs [1].

Some of the examples of Silatur-Rahim are: visiting relatives; greeting and honoring them; inviting them even to a cup of coffee or tea; giving them good advice in case of a problem; not harming them by talking behind their back, insulting or accusing them, or by interfering in their personal affairs; being kind and caring about them; visiting them when they are sick; giving them gifts in different occasions; fulfilling their needs before others do, and participating in their funerals [1]. Imam Sadiq has(AS) said: “… The best family tie is the one in which the relatives are not harmed” [2].

Upholding kinship with relatives has various advantages in this world and the hereafter:
Having the social and emotional support of family: In Surah Hud, where people threaten Prophet Shu’ayb (PBUH), they tell him if his tribe had not supported him, they would have stoned him (11:91).

Having an immediate reward: Imam Baqir (AS) said: “The reward of Silatur Rahim is given more quickly than any good deed” [4].

Increase in wealth: Prophet Muhammad (PBUH&HP) said: “Whoever keeps family kinship, God will love him and increase his wealth” [5].

Having some of the sins vanished: Imam Ali (AS) said: “Eliminate your sins by a voluntary charity and keeping family ties” [6].

Having an easy death and a long life: When Prophet Moses (PBUH) asked God about the reward of upholding family ties, the answer was: “(Whoever does so,) I will postpone his death, I will make his death easy, and the heaven angles will call him to enter heaven from every door he wishes” [7].

Prophet Muhammad (PBUH) said: “Whoever keeps family kinship …God will make his life longer and let him enter heaven” [6]. Imam Baqir (AS) said: “Keeping family ties purifies one’s deeds, increases his wealth, keeps him safe from disasters, makes the accounting of his deeds easy and postpones his death” [8]. Imam Sadiq (AS) said; “Silatur Rahim makes lives longer …, even if doers are not righteous” [9].

One cannot sever family kinship deliberately since upholding family bonds is a duty ordered by God, hence, the disobedience from this order is of the major sins (al-Kaba’ir) [10].

In Islam, the warnings against severing and breaking off family bonds are as many as the exhortations to uphold family ties. That is due to the disastrous consequences that neglecting and severing family ties can have on one’s life; these include:

Having a shorter life than it would be: Imam Sadiq (AS) said: “a man might have 33 years of his life left, but God will shorten it to 3 years if he breaks family ties” [11]. In another narration from Imam (AS), negligence of family bonds is known as “a sin that perishes a man quickly” [12].

Being cursed by God [i] and deprived of his mercy: “But as for those who ... sever what Allah has commanded to be joined, … it is such on whom the curse will lie, and for them will be the ills of the [ultimate] abode” (13:25).

Being doomed to the hell: Prophet Muhammad (PBUH&HP) has said: “the sweet smell of heaven will be sensed from a thousand year of distance but those who have been insolent to the parents and those who have broken family ties will be deprived of it” [14].

One’s prayers (Dua) will not be accepted anymore after severing family ties [15].

One’s good deeds will be rejected: Imam Rida (AS) said: “whoever sever family ties, he does not fear from God (does not have Taqwa), his good deeds are therefore refused and will face grave punishments in this world and the hereafter” [16].

Cutting family ties has several reasons, but lack of modesty and greed are known as the two main ones. Imam Sadiq (AS) said that: “Some would not have respected parents’ rights and kept family ties if modesty had not existed” [17].

Prophet Muhammad (PBUH&HP) has warned about greed: “Beware of greed, for it was greed that commanded those before you to bloodshed and severing their family ties” [18].