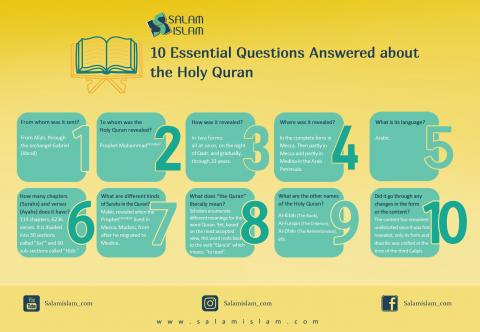 from Allah, through the archangel Gabriel (Jibrail)

2. To whom was the Holy Quran revealed?

In two forms: all at once, on the night of Qadr, and gradually, through 23 years.

4. Where was it revealed?

In the complete form in Mecca. Then partly in Mecca and partly in Medina in the Arab peninsula.

5. What is its language?

6. How many chapters (Surahs) and verses (Ayahs) does it have?

7. What are different kinds of Surahs in the Quran?

Makki, revealed when the prophet Muhammad (PBUH&HP) lived in Mecca, Madani, from after he migrated to Medina.

8. What does " the Quran" literally mean?

Scholars enumerate different meanings for the word Quran. Yet, based on the most accepted view, this word roots back to the verb " Qara'a " which means, " to read" .

9. What are the other names of the Holy Quran?

Al-Kitab (The Book), Al-Furqan ( The Criterion), Al-Dhikr ( The Remembrance), etc.

10. Did it go through any change in the form or the content?

The content has remained undistorted since it was first revealed, only its form and diacritics was unified at the time of the third Caliph.