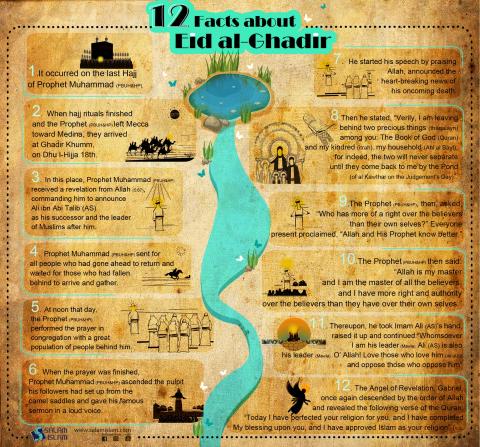 
Eid al-Ghadir is one of the most important historical events celebrated by many Muslims on the 18th day of the last Islamic month, Dhu al-Hijjah. This infographic highlights the incidents that occurred on this significant occasion. These include:

1. It occurred on the last Hajj of Prophet Muhammad (PBUH&HP).
2. When hajj rituals finished, and the Prophet (PBUH&HP) left Mecca toward Medina, they arrived at Ghadir Khumm, on Dhu l-Hijja 18th.
3. In this place, Prophet Muhammad (PBUH&HP) received a revelation from Allah (5:67), commanding him to announce Ali ibn Abi Talib (AS) as his successor and the leader of Muslims after him.
4. Prophet Muhammad (PBUH&HP) sent for all people who had gone ahead to return and waited for those who had fallen behind to arrive and gather.
5. At noon that day, the Prophet (PBUH&HP) performed the prayer in congregation with a great population of people behind him.
6. When the prayer was finished, Prophet Muhammad (PBUH&HP) ascended the pulpit his followers had set up from the camel saddles and gave his famous sermon in a loud voice.
7.  He started his speech by praising Allah, announced the heartbreaking news of his oncoming death.
8. Then he stated, “Verily, I am leaving behind two precious things (thaqalayn) among you: The Book of God (Quran) and my kindred (itrah), my household (Ahl al Bayt), for indeed, the two will never separate until they come back to me by the Pond (of al Kawthar on the Judgement's Day)”.
9. The Prophet (PBUH&HP), then, asked, “Who has more of a right over the believers than their own selves?” Everyone present proclaimed, “Allah and His Prophet know better.”
10. The Prophet (PBUH&HP) then said: “Allah is my master and I am the master of all the believers, and I have more right and authority over the believers than they have over their own selves.”
11. Thereupon, he took Imam Ali (AS)’s hand, raised it up and continued:
“Whomsoever I am his leader (Mawla), Ali (AS) is also his leader (Mawla). O’ Allah! Love those who love him (Ali (AS)) and oppose those who oppose him.”
12. The Angel of Revelation, Gabriel, once again descended by the order of Allah and revealed the following verse of the Quran:
“Today I have perfected your religion for you, and I have completed My blessing upon you, and I have approved Islam as your religion” (5:3).