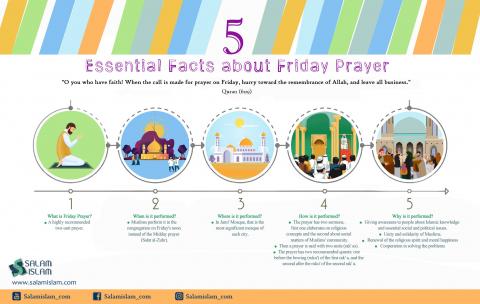 
Friday prayer is one of the most important rituals in Islam, which is performed every week among Muslims congregationally. In what follows, you will learn about some of the essential facts about Friday prayer, which will give you a clearer view of this ritual:

"O you who have faith! When the call is made for prayer on Friday, hurry toward the remembrance of Allah and leave all business." Quran (62:9)

1.    What is Friday Prayer?
•    A highly recommended two-unit prayer.
1.    When is it performed?
•    Muslims perform it in the congregation on Friday's noon instead of the Midday prayer (Salat al-Zuhr).
1.    Where is it performed?
•    In Jami' Mosque, that is the most significant mosque of each city.
1.    How is it performed?
•    The prayer has two sermons. The first one elaborates on religious concepts and the second about social matters of Muslims' community.
•    Then a prayer is said with two-units (rak' as).
•    The prayer has two recommended qunuts: one before the bowing (ruku') of the first rak' a, and the second after the ruku' of the second rak' a.
1.    Why is it performed?
•    Giving awareness to people about Islamic knowledge and essential social and political issues.
•    Unity and solidarity of Muslims.
•    Renewal of the religious spirit and moral happiness
•    Cooperation in solving the problems