6 Points that Reveal Imam Hussain (AS) Was Not After War

6 Points that Reveal Imam Hussain (AS) Was Not After War 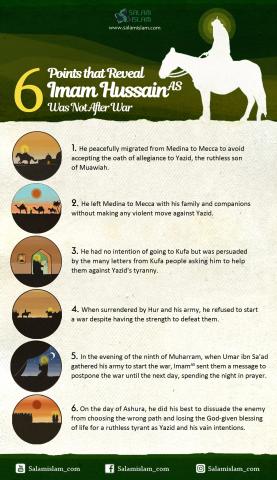 1. He peacefully migrated from Medina to Mecca to avoid accepting the oath of allegiance to Yazid, the ruthless son of Muawiah.

2. He left Medina to Mecca with his family and companions without making any violent move against Yazid.

3. He had no intention of going to Kufa but was persuaded by the many letters from Kufa people asking him to help them against Yazid's tyranny.

4. When surrendered by Hur and his army, he refused to start a war despite having the strength to defeat them.

5.  In the evening of the ninth of Muharram, when Umar ibn sa'ad gathered his army to start the war, Imam (AS)sent them a message to postpone the war until the next day, spending the night in prayer.

6. On the day of Ashura, he did his best to dissuade the enemy from choosing the wrong path and losing the God-given blessing of life for a ruthless tyrant as Yazid and his vain intentions.