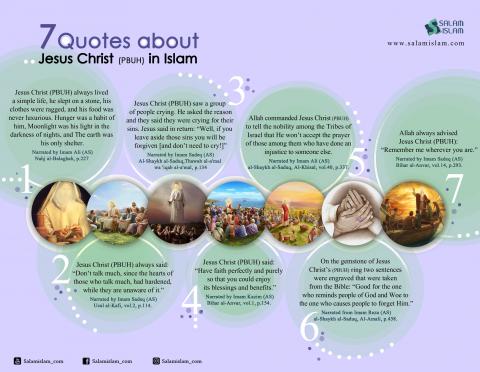 
Here are some Quotes about Jesus Christ (PBUH) narrated by the infallible Imams:

1.    Jesus Christ (PBUH) always lived a simple life, he slept on a stone, his clothes were ragged, and his food was never luxurious. Hunger was a habit of him, Moonlight was his light in the darkness of nights, and The earth was his only shelter
Narrated by Imam Ali (AS)
Nahj al-Balaghah, p.227

2. Jesus Christ (PBUH) always said: “Don’t talk much, since the hearts of those who talk much, had hardened, while they are unaware of it.”

3. Jesus Christ (PBUH) saw a group of people crying. He asked the reason, and they said they were crying for their sins. Jesus said in return: “Well, if you leave aside those sins you will be forgiven [and don’t need to cry!]”

4. Jesus Christ (PBUH) said: “Have faith perfectly and purely so that you could enjoy its blessings and benefits.”
Narrated by Imam Kazim (AS)
Bihar al-Anvar, vol.1, p.154.

5. Allah commanded Jesus Christ (PBUH) to tell the nobility among the Tribes of Israel that He won’t accept the prayer of those among them who have done an injustice to someone else.
Narrated by Imam Ali (AS)
al-Shaykh al-Saduq, Al-Khisal, vol.40, p.337.

6. On the gemstone of Jesus Christ’s (PBUH) ring, two sentences were engraved that were taken from the Bible: “Good for the one who reminds people of God and Woe to the one who causes people to forget Him.”
Narrated from Imam Reza (AS)
al-Shaykh al-Saduq, Al-Amali, p.458.