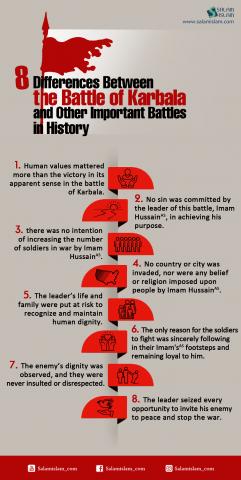 
1. Human values mattered more than the victory in its apparent sense in the battle of Karbala.

2. No sin was committed by the leader of this battle, Imam Hussain (AS), in achieving his purpose.

3. there was no intention of increasing the number of soldiers in war by Imam Hussain (AS).

4. No country or city was invaded, nor were any belief or religion imposed upon people by Imam Hussain (AS).

5. The leader’s life and family were put at risk to recognize and maintain human dignity.

6. The only reason for the soldiers to fight was sincerely following in their Imam's (AS) footsteps and remaining loyal to him.

7. The enemy’s dignity was observed, and they were never insulted or disrespected.

8. The leader seized every opportunity to invite his enemy to peace and stop the war.