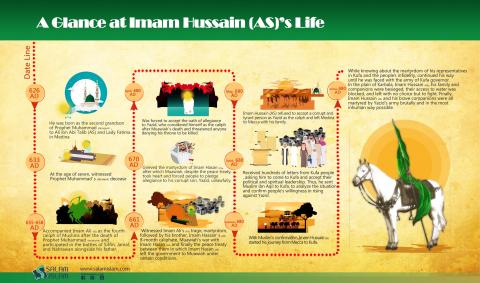 
In this infographic we have provided you with a quick glance at the life of Prophet Muhammad's (PBUH&HP) grandson, and the third Imam of Shias, Imam Hussain (AS):

626 AD He was born as the second grandson of Prophet Muhammad (PBUH&HP), to Ali ibn Abi Talib (AS) and Lady Fatima (AS) in Medina

655-658 AD Accompanied Imam Ali (AS) as the fourth caliph of Muslims after the death of Prophet Muhammad (PBUH&HP) and participated in the battles of Siffin, Jamal, and Nahrawan alongside his father.

661 AD Witnessed Imam Ali’s (AS) tragic martyrdom, followed by his brother, Imam Hassan’s (AS) 8-month caliphate, Muawiah’s war with Imam Hasan (AS) and finally the peace treaty between them in which Imam Hasan (AS) left the government to Muawiah under certain conditions.

670 AD Grieved the martyrdom of Imam Hasan (AS), after which Muawiah, despite the peace treaty, took heart and forced people to pledge allegiance to his corrupt son, Yazid, unlawfully.

April, 680 AD Was forced to accept the oath of allegiance to Yazid, who considered himself as the caliph after Muawiah’s death and threatened anyone denying his throne to be killed.

May, 680 AD Imam Hussain (AS) refused to accept a corrupt and tyrant person as Yazid as the caliph and left Medina to Mecca with his family.

June, 680 AD Received hundreds of letters from Kufa people, asking him to come to Kufa and accept their political and spiritual leadership. Thus, he sent Muslim ibn Aqil to Kufa, to analyze the situation and confirm people’s willingness to rise against Yazid.

September, 680 AD With Muslim’s confirmation, Imam Hussain (AS) started his journey from Mecca to Kufa.

October, 680 AD While knowing about the martyrdom of his representatives in Kufa and the people’s infidelity, he continued his way until he was faced with the army of Kufa governor. In the plain of Karbala, Imam Hussain (AS), his family and companions were besieged, their access to water was blocked, and left with no choice but to fight. Finally, Imam Hussain (AS) and his brave companions were all martyred by Yazid’s army brutally and in the most inhuman way possible.