A Glance at the Life of Imam Musa b.Ja'far al Kazim (AS)

A Glance at the Life of Imam Musa b.Ja'far al Kazim (AS) 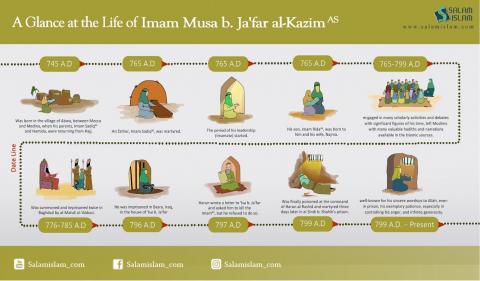 
745 A.D Was born in the village of Abwa, between Mecca and Medina, when his parents, Imam Sadiq (AS) and Hamida, were returning from Hajj.

765 A.D The period of his leadership (Imamate) started.

765-799 A.D Engaged in many scholarly activities and debates with significant figure of his time, left Muslims with many valuable hadiths and narrations available in the Islamic sources.

776-785 A.D Was summoned and imprisoned twice in Baghdad by al-Mahdi al-Abbasi.

799 A.D Was finally poisoned at the command of Harun al-Rashid and martyred three days later in al-Sindi b.Shahik's prison.

799 A.D      _ Present well known for his sincere worships to Allah, even in prison, his exemplary patience, especially in controlling his anger, and infinite generosity.