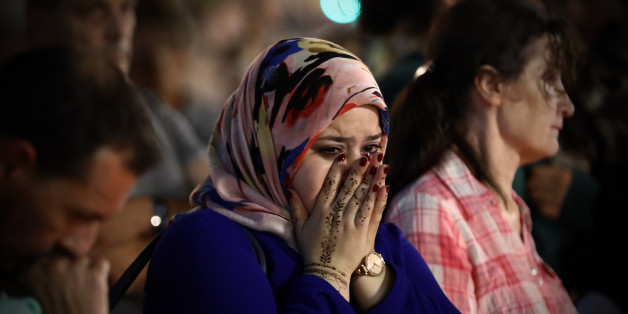 NICE, France — When a Tunisian man drove a truck down a crowded street in Nice last week in an attack claimed by the Islamic State, more than one-third of the people he killed were Muslim, the head of a regional Islamic association said on Tuesday.

Kawthar Ben Salem, a spokeswoman for the Union of Muslims of the Alpes-Maritimes, said that Muslim funerals were being held for at least 30 of those who died during the Bastille Day attack, including men, women and children.

The Paris prosecutor’s office, which handles terrorism investigations, said on Tuesday that all 84 people killed in the attack had been formally identified, meaning that the number of Muslim fatalities may be even higher. The number of people who were wounded was also raised, to 308 people.

The attack occurred after a fireworks display, as the Tunisian man, identified as Mohamed Lahouaiej Bouhlel, drove a cargo truck around a barrier and accelerated as people were slowly beginning to leave the beach area. The truck plowed into the crowds, tacking from one side of the road to the other. The road had been closed to vehicular traffic for the display.

About 120,000 people in the Alpes-Maritimes are from the Maghreb — including Algeria, Tunisia and Morocco — and while the majority are most likely Muslims, some are Jews and Christians, according to rough estimates by various local associations. Nice is also a destination for Muslims from Senegal and other West African countries where French is spoken, and there is also a sizable community of Muslims from the Comoros Islands.

“This is complicated in terms of mourning for the whole world; this is also a little complicated for the Muslim community which is afraid that acts of violence,” will be directed at them, said Ms. Ben Salem. “We hope that this sends a global message that the barbarity touches the whole world and that the people here, the victims, are not those who commit the crimes in Syria and Iraq.”

At least 10 children and teenagers were killed in the attack, but because Mr. LahouaiejBouhlel was identified as a Muslim, she said, many people “don’t see that some Muslim children were killed with the other children.”

Thousands of locals and tourists turned out for the July 14 fireworks, a free event held on the beautiful waterfront that arcs along the bay.

OucineJamouli, 62, the head of a Moroccan association, attributed the heavy Muslim turnout at least partly to the fact that there is less drinking at the Bastille Day festival than at other big events in Nice because it is a family-oriented celebration.

It is also less religious than Nice’s other major festivals: a Christmas market, the Carnival festival at Mardi Gras and the fireworks for Aug. 15, which marks the Catholic feast of the Assumption of the Virgin Mary to heaven.

“There are so many people at the fireworks, of every race, every color, every religion,” said Mr. Jamouli, who runs a Moroccan restaurant a block from the Promenade des Anglais, where the attack occurred. “Terror basically aims at the whole society and at its freedom.”

People from at least 13 countries lost their lives, according to reports drawn from foreign ministries around the world, including citizens of Estonia, France, Germany, Russia, Switzerland, Tunisia and the United States.

For the Muslims who died, the Islamic association will conduct a ritual Muslim cleansing of the body and will say prayers. Depending on the wishes of the families, the bodies will either be buried in the Nice area or be repatriated to their home countries.

The United States Embassy said that several Americans were not accounted for, according to reports it had received from relatives who reached out to diplomats there to say that they have not heard from family members who were believed to have been in Nice around the time of the attacks.

Estonia’s Prime Minister, TaaviRoivas, said in a statement on Tuesday: “For the first time, we have to face a harsh reality and say that the agony of terrorism has reached us in the saddest way imaginable.”

The two Estonians killed in the attack were a woman whose name has not been released, who was strolling along the Promenade des Anglais with her granddaughter, and a 21-year-old student at the Tallinn University of Technology, identified by officials as RickhardKruusberg.

Michel Raineri, the French ambassador to Estonia, sent a letter of condolence to President Toomas Hendrik Ilves on Tuesday, writing that the attack  “reaffirms that only the unity of Europe can help us win over hate and hostility.”