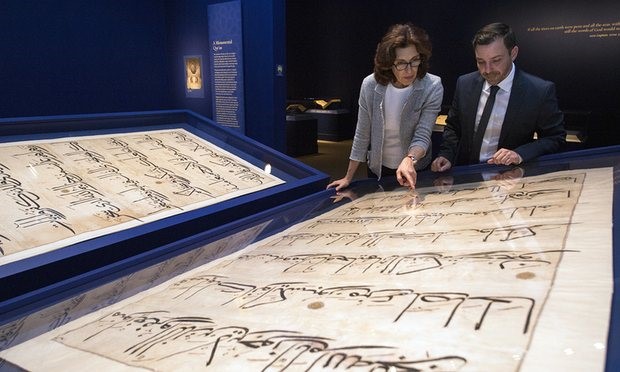 The last significant survey of Islam’s holy book in the west was held at the British Museum in London in 1976. Into that void comes the first major exhibit on the Quran in the United States, The Art of the Quran: Treasures from the Museum of Turkish and Islamic Arts, at the Sackler Gallery in Washington DC. On display are more than 60 richly decorated manuscripts that span nearly a millennium, cover a vast area of the Islamic world and encompass an array of styles and formats, from simple sheets of parchment to large bound tomes.

The exhibit offers “an unparalleled view of some of the greatest [Islamic] calligraphy, illumination and binding”, said museum director Julian Raby. “Above all, we convey the sense of how artists from North Africa to Afghanistan found different ways to honor the same sacred text of Islam.”

The objects are primarily drawn from the superb holdings of the Museum of Turkish and Islamic Arts (TIEM) in Istanbul, which has loaned 47 priceless works dating from the late seventh to early 17th centuries, the majority of which have never before been shown outside of Turkey; these are juxtaposed with about 16 items from the Freer and Sackler museums’ permanent collection.

While some may read a deeper significance into the timing of the exhibit – which opens amid an extremely contentious and politicized atmosphere surrounding Muslims in the US – museum officials say it is entirely happenstance. It’s the culmination of a collaboration between the two institutions, for which the seed was planted back in 2010, when the TIEM organized its own monumental Qur’an survey.

Massumeh Farhad, the Freer and Sackler’s chief curator and curator of Islamic art, draws a parallel with the Sackler’s landmark 2006 show on biblical manuscripts, In the Beginning: Bibles Before the Year 1000. “Doing this exhibition is really a continuation of bringing the cultures of Asia, whether social, political or religious, to America, especially to Washington,” Farhad said.

The Art of the Qur’an aims to introduce visitors to the Islamic holy book as both foundational sacred text – the divine message for Muslims, received by the Prophet Muhammad between 610 and 632 – and work of art. Early sections present key aspects of the Qur’an, such as its references to previous prophets (including Abraham and Moses) and continuity with earlier monotheistic scriptures, and themes including revelation, Judgment Day and the mercy of God.

The latter half focuses on what co-curator Simon Rettig calls the “artistic traditions that originated from transcribing the Qur’an” over the centuries. “It’s this idea of transformation [from a purely oral text] into a book, and adaptation.”

The show includes some of the oldest extant Quranic manuscripts, created within a century of Muhammad’s death in 632, which survived in part because the revered texts could never be thrown away. Two parchment folios dated to before 725 during the Umayyad period in the Near East, for example, are marked in plain brown ink in the vertically oriented Hijazi script, with simple designs – such as a palm tree or geometric pattern – separating different chapters, or surahs.

Due to the Islamic proscription on figurative images in religious contexts, the words of the Qur’an took on great visual importance, leading to the development of varied styles of calligraphy, as well as ornate decorative and binding techniques – particularly after the introduction of paper by the 11th century, which, according to Farhad, led to an “incredible burst of creativity”.

“The Qur’an can never be illustrated, so it was through illumination, whether using gold, or gold and other colors, that you could decorate the holy text,” she explained. “Many of the manuscripts were really intended to dazzle, whether by their size, their illuminations, their calligraphy, choice of paper or choice of ink. The experience of these manuscripts was very important.”

Indeed, some of the most magnificent works are thought to have been made primarily for show, given that those publicly reciting the sacred text already knew it by heart. “The written Qur’ans were in many instances meant to help the believers to recite,” said Farhad. “We repeatedly come back to the orality of the message and how critical that is.”

The Qur’ans on view at the Sackler are some of the finest existing examples from diverse historical eras and cultures, including the Umayyad and Abbasid Arab caliphates, Iran and Afghanistan during the Seljuk period, the Mongol Il-Khanid dynasty and Timurid empire, Mamluk Egypt and the Safavid Persian and Ottoman empires.

Many of the pieces were commissioned and collected by sultans, viziers and other notables – including, during the Ottoman period, a number of women in the royal family; others were acquired as gifts or plunder. On a military campaign in Iran in 1533, for instance, the Ottoman sultan Suleiman the Magnificent brought back sections of a stunning 30-volume Quran in dramatic black and gold muhaqqaq script that the Mongol ruler Uljaytu had commissioned in Baghdad in the early 1300s.

Rather than holding on to them for personal use, Muslim elites often endowed these Qur’ans to particular religious institutions such as mosques, madrasas or mausoleums. The exhibit explores “what it is about these manuscripts that is so important that sultans, emirs, viziers [were] collecting them from all over the Islamic world, brought them to the Ottoman domain and then … [were] donating them to their mosques, their tombs, for people to hear the message,” explained Farhad.

Later rooms examine the history behind specific works, shedding light on the people involved, from the master calligraphers and illuminators – some particularly renowned – who produced them, to their ownership lineage, which was in some cases meticulously documented. A strikingly colorful single-volume Qur’an from late-16th-century Shiraz, Iran, has an endowment note indicating that Nurbanu Sultan, the powerful wife of Selim II, donated it to Istanbul’s Atik Valide mosque in 1583; it was later moved to an imperial mosque commissioned by Selim II’s sister Mihrimah.

That so many exquisite examples did not end up damaged, lost or in the hands of private collectors is no accident. In 1914, as the Ottoman empire was in its waning days, government officials ordered manuscripts and other valuables housed at religious institutions across the Ottoman domains to be brought for safekeeping to Istanbul, thus ensuring their preservation. The objects formed the basis of the then newly opened Museum of Islamic Endowments, later renamed the TIEM. (Those currently on loan at the Sackler comprise just a fraction of the more than 3,000 Qur’ans and over 250,000 loose-leaf fragments in the TIEM’s collection.)

“There are manuscripts here of a standard that you don’t see in other collections,” said museum director Raby, noting that even many Muslim visitors are unlikely to have “had the chance to see material like this before”.

The curators are hopeful that, aside from being dazzled by the works’ visual splendor, non-Muslims will gain a greater awareness and appreciation of the holy text of roughly a quarter of the world’s population.

“What we hope is really to offer a different perspective on the Qur’an than has been presented, and is repeatedly presented given the state of the world,” said Farhad. “And by doing that, to encourage more nuanced understanding and discussion about both the Qur’an and about Islam and its culture.”