One of the issues emphasized in Islam, and the Quran is contemplation and reflection. Human beings are created to worship Allah almighty, yet praising Him is not restricted to religious rituals and practices. According to Imam Hasan Al-Askari (AS), worship is contemplating on Allah Almighty's affairs [1]. It means being mindful of the signs of Allah Almighty, pondering about them, and realizing how powerful He is. Some of these signs are mentioned in the Quran (2:164), of which some have been discovered as scientific facts many centuries after the revelation of the Quran. Here, we review some of these facts.

1. Adornment of the Lowest Sky: Stars

In Surah Saffat, it is stated that: "Indeed We have adorned the lowest heaven with the finery of the stars." (37:6). The lowest heaven means the nearest sky that we observe from the earth. The Quran introduced this fact, while in that era, the accepted hypothesis was that the fixed stars existed only in the highest sky (the 8th sky, according to Claudius Ptolemy's hypothesis). Nowadays, it is also known that as light passes through pockets of the earth's atmosphere, it is affected by winds in the atmosphere and by areas with different temperatures and densities. It is, therefore, diffracted (bounced around), causing a quick apparent dimming and brightening when looking from the ground. This phenomenon perfectly fits the term "lower heaven," while out of earth's atmosphere, it doesn't happen.

2. Every Star Moves in its Proper Path

Today, we know that each star holds a proper position in the sky, and its path and orbit depends on gravity. The velocity of each is also specific. Although exact calculation about the stars too far away is not possible, the measurements done for the stars of the Milky Way Galaxy confirms these facts.

3. Sun's Orbit according to the Quran

In 1512 AD, the astronomer Nicholas Copernicus put forth the theory that the sun is at rest near the center of the universe and that the earth, spinning on its axis once daily, revolves annually around the Sun [2]. This belief that the sun is motionless was not acknowledged by astronomers until the 20th century. That's while in the Quran, it is mentioned that: "And the sun runs on to its place of rest. That is the ordaining of the All-mighty, the All-knowing." (36:38).

This Quranic account of the sun's motion is consistent with modern Astronomy because the mentioned Copernicus's theory is not valid anymore. Instead, it has been well-established that the sun is not stationary, but is moving in its orbit around the center of Milky Way Galaxy.

Today, it is known that the gravitational forces hold the celestial bodies apart from each other, hence, preventing their collision [3]. This fact was explicitly stated in the Quran: "It is Allah who raised the heavens without any pillars that you see" (13:2), and: "He created the heavens without any pillars that you may see" (31:10). According to these verses, there exist invisible supports that raise the heavens. These supports are now referred to as the gravitational and other unseen forces in the universe [3].

Some of the astronomical facts discussed in the Quran and were discovered later on by scientists were described above. There remain still other points presented in the second part of this topic. Follow us to find out more. 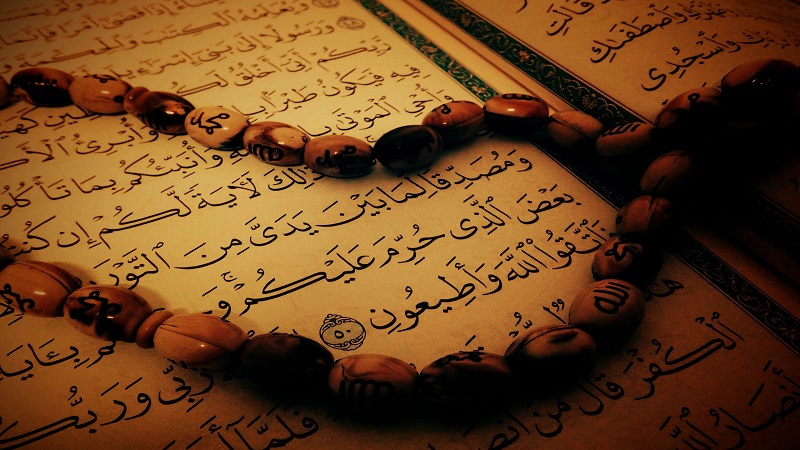 In the two previous parts of this topic, we reviewed some astronomical facts and some points about our nature. Through the following lines, you can find out other scientific facts mentioned in the Quran.

Scientists have recently come to know that not every cloud is a rain cloud, but certain types of wind and clouds and definite steps are effective for forming rain clouds. They have found that one type of clouds go through the following steps to produce rain [1].
The clouds are pushed by the wind. Then, the small clouds join together to form a larger cloud, hence updrafts increase within the large cloud. Some phenomenon cause the cloud to stack up which stretches the cloud body into cooler regions where drops of water and hail form and begin to grow larger [1].
When these drops and hail become too heavy, they fall from the cloud as rain, hail, etc. [2]. This phenomenon is described in Surat Al-Nur: “Have you not regarded that Allah drives the clouds, then He composes them, then He piles them up, whereat you see the rain issuing from its midst?” (24:43).

In Surat Al-Nur, it is stated that: “Or like the manifold darkness in a deep sea, covered by billow upon billow, overcast by clouds, manifold [layers of] darkness, one on top of another: when he brings out his hand, he can hardly see it” (24:40).
The darkness in deep seas mentioned in this verse is found around a depth of 200m and below where there is almost no light. Below a depth of 1000m, there is no light at all [3].
The verse states that there are two sets of waves, one above the other. Scientists called the lower waves as internal waves which “occur on density interfaces between layers of different densities” [4]. Since the deep waters of seas and oceans are denser than the waves above them, the internal waves cover them. They act like surface waves and might break just as them. They are not observable by the human eye, but can be detected by studying temperature or salinity changes at a given location [4].

The stages of human embryonic development in The Quran

Human embryonic development are described in the Quran as: “Certainly We created man from an extract of clay. Then We made him a drop of [seminal] fluid [lodged] in a secure abode. Then We created the drop of fluid as a clinging mass (alaqah). Then We created the clinging mass (alaqah) as a fleshy tissue (mudhqah).” (23:12-14).
The word alaqah has three meanings in Arabic: leech, suspending thing, and blood clot. In comparison to leech, an embryo in the alaqah stage obtains nourishment from mother’s blood, same as the leech which feeds on the blood of others [2]. During the alaqah stage, the embryo is suspended in mother’s womb, hence, the word “suspended thing” fits, too. Finally, during the alaqah stage, due to the presence of relatively large volume of blood present in the embryo, it looks like a blood clot. Besides, the blood does not circulate until the end of the 3rd week, just as a blood clot. Hence, these three meanings describe accurately the embryo at this stage.
The nest stage is described by the word mudhghah which means “chewed substance”. In fact, the somites at the back of the embryo “somewhat resemble teeth marks in a chewed substance” [5].

The creation in pairs

It has been recently discovered that everything in the universe is created in pair, as do male and female among living things. The parity among living creatures are stated in several the verses of the Quran as: “Immaculate is He who has created all the pairs of what the earth grows, and of themselves, and of what they do not know.” (36:36), “and that it is He who created the mates, the male and the female.” (53:45). And who created all the pairs and made for you the ships and the cattle such as you ride.” (43:12), “In all things We have created pairs so that you may take admonition.” (51:49). These verses mention the parity in things that grow from soil (i.e. plants), in animals, in those have been created from their own selves (i.e. humans), and things we do not know.

The latter includes every other thing other than living things. The discovery of Paul Dirac known as “Parity”, for which he was awarded the Noble Prize in 1933, confirms this claim by stating that every matter has a pair called anti-matter [6].
Although the Quran is not basically a book dedicated to scientific issues, we realized from above that it contains scientific facts that have only been discovered recently through the advancement of technology and scientific knowledge. These scientific facts are a few of many clear signs of Allah Almighty. They prove that the Quran is the word of all-knowing all-wise Allah Almighty and Allah Almighty is the only one that merits to be worshiped.

The foundation of each person’s life is the faith they have in what they believe. Like other belief systems, there are some “ Islamic axioms”- basic principles or self-evident truths- whose acceptance is regarded as the leading entry to this religion.

The Importance of Rational Thinking

Unlike Saint Augustine’s [i] claim that says: “I believe in order to understand,” which shows a lack of reason in at least some sects of Christianity, in Islamic reasoning, rational thinking is a priori and prerequisite for the realization of faith.

In Islam, faith is nothing beyond human’s reason and understanding; in other words, the axioms of this religion are the fundamental principles that are rational by themselves and can be ascertained by people’s common sense. So stepping into the stage of this faith depends on the submission that is gained through preliminary investigation of its axioms.

Additionally, faith is not accepted in Islam unless these doctrines are freely investigated and understood by every individual either commonsensically or intellectually, so Imitation is not permitted at this stage. Consequently, the basic principles or doctrines of Islam are defined as axioms that have to be testified on the verge of converting to Islam.

The Islamic Axioms: A short definition

One might wonder what these axioms are. The most certain and evident of them are monotheism (Tawhid), prophethood (Nubuwwah) and the afterlife (Ma'ad), which are innate in human’s nature separately. ‘Tawhid’ or monotheism is the most fundamental religious knowledge that holds God exists, is The Only One and independent of the entire creation. It declares the unity and uniqueness of God as the only creator and sustainer of the universe.

The realization of this concept (the existence and oneness of God) is before the other two (prophethood and afterlife), that is its acceptance leads to the affirmation of them rationally.

Prophethood is God's blessing and favor that is bestowed on an individual chosen by Him to convey His message. Every prophet states that all he receives is from Allah and for the well-being of humanity. He confirms what was revealed before him and what may be revealed by a future prophet.

Thus the revealed message is always the same in essence and purpose, and it cannot deviate from prior or future revelations. Prophets are needed for conveying God's instructions and guidance to humankind. Without this knowledge, we would be unable to answer the fundamental questions of our existence either here in this world or the world that is to come.

Information about the afterlife, as the third fundamental axiom in Islamic teaching, is provided by the prophets whose truth we have testified. They have told us to have faith in the continued existence of human beings after death and that there will be a day of judgment when all humans will be held accountable for their actions and divided between the eternal destinations of Paradise and Hell.

In brief, Islam is the religion of rational thinking that encourages its followers to individually investigate and question the truth of its doctrines before accepting them, to reach firm belief through common sense or intellect; this makes them submit to God’s commands willingly and contently.

[i]. An early Christian theologian and philosopher.