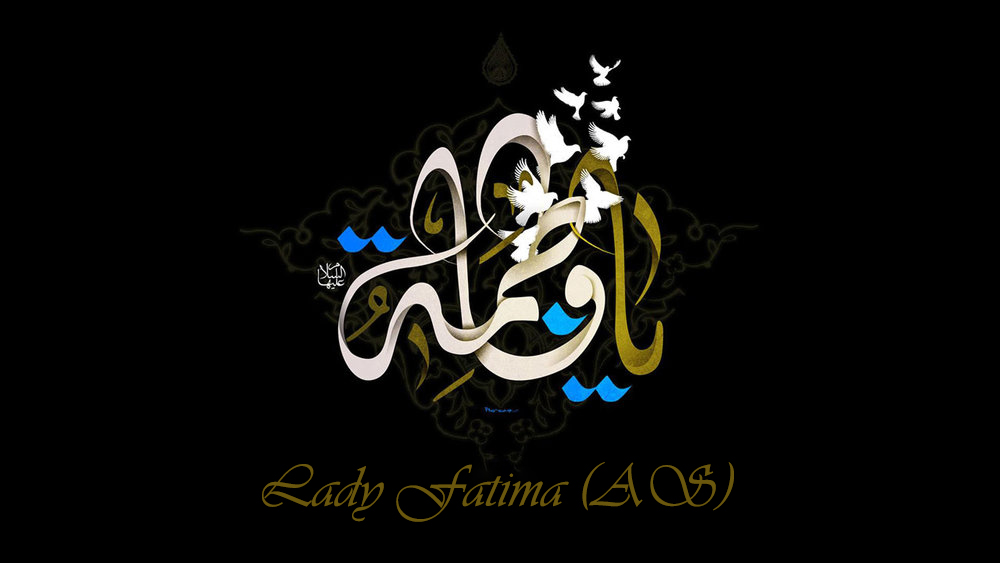 Whoever loves my daughter, Fatima (AS), will be with me in heaven, and whoever holds grudges against her will reside in hell.

2. The Best in Worshiping Allah

Fatima (AS) is the best companion in the path toward serving and worshiping Allah.

Fatima (AS) is the dearest of people to me.

4. Lady Fatima (AS), the Joy of Her Father's Heart

Fatima is of my flesh, who is the light of my eyes and the warmth of my heart.

5. Injustice to Lady Fatima (AS)

Woe to whoever does wrong to my daughter, Fatima (AS), after my death.

6. Paying a Visit to Lady Fatima (AS)

Visiting Fatima (AS) equals to visiting me.

Fatima (AS) is an angel who smells like heaven.

Verily, Allah has poured faith and belief into the veins of Fatima (AS); thus, she is consistent in worshiping Allah.

I did not give permission for Fatima (AS)’s marriage until I received Allah’s command as to her marriage.

My daughter’s light is of Allah, and her status is higher than heaven and earth.

14. Asking Allah's Pardon for Others

O’ Fatima! I give you the glad tiding of holding a high status in Allah’s regard, which provides you with the power to ask pardon for other people.

1. The Taste of Water

Cleanliness is among the manners of prophets.

Any food that benefits the body and brings energy to it is allowed (Halal), and whatever harms the body and drains its energy is forbidden (Haram).

4. A Plan for Life according to Imam Rida (AS)

Try to divide your day into four parts; a part for praying to Allah, one for providing your livelihood, one for spending time with your friends and the ones you trust to tell your mistakes and love you sincerely, and a part for enjoying Halal pleasures which gives you the ability to fulfill the other parts.

5. This World and the Hereafter

The one who puts aside his/her world [ultimately] for the sake of his/her religion, or vice versa, is not among our followers.

Observe your manners in your relations with the ones older or younger than you.

Whoever washes away a believer's grief, Allah will save him/her from despair on the Day of Judgment.

Allah has commanded to express gratitude toward Himself and your parents; therefore, if you don't give thanks to your parents, you are not grateful to Allah.

Reason is your best friend and ignorance, your worst enemy.

You are ridiculing yourself if you ask for Allah's help, yet don't make any attempts [to reach your goal].

The one who greets a poor Muslim differently than a rich person will face Allah's wrath on the Day of Judgement.

From the two groups who face each other, victory belongs to the one that shows more generosity.

Modesty has different manifestations; one is for those who know their limitations, accept their position contently, like to treat people the way they expect to be treated, confront insult with benevolence, control their anger and forgive people. Allah loves the righteous.

Allah will treat the one who holds an optimistic view toward Him, the same as his/her approach.

Eating less and refraining from excessive use of food will protect your body against various diseases.

Two groups are always sick; A healthy person who abstains from food and a sick person who does not abstain.

Whoever respects Allah's sanctuary, he/she will be respected, and whoever obeys Allah, will be obeyed.

A generous person eats from other people's food [if invited], for people to eat from his/hers, and the ungenerous does not eat from other's food, to not offer his/her own food to others.

19. Children and the Elderly

Respect the elderly, be kind to children, and pay a visit to your relatives.

Whoever knows his/her value will never be devastated.

Fitr has been appointed as Eid for Muslims to come together as a community on this day in the presence of the Lord and thank Him for His blessings.

Visit each other regularly to create more love between yourselves, and hold each other's hands and wipe anger away from your hearts.

24. The Manner of Borrowing

The one who borrows something with the intention of giving it back is under Allah's protection until he does so. However, if he doesn't have the intention of paying the debt back to its owner, he is considered a thief.

Patience, knowledge, and silence are signs of awareness. Silence is one of the gates to wisdom. It endows human beings with tenderness and guides them toward virtues.

Wearing perfume is one of the manners of prophets.

The one who repents from sin and repeats doing it seems like a person who is ridiculing his/her Lord.

The value of worshipping does not depend on the number of prayers or fasts. Instead, true worship is pondering deeply on Allah and everything related to Him.

The first step in serving Allah is knowing Him.

Whoever smiles at his/her fellow believer, will win Allah's reward.

The one who doesn't gratify a kindness received by others has not given thanks to Allah Almighty.

Insignificant sins lead into great sins and the one, who doesn't have any fear of Allah while committing the insignificant ones, won't feel any fear in doing the great ones.

You are not a devout worshipper if you do not seek forbearance.

If your neighbor is not safe from your harm, you are not among our followers.

The one who breaks promises is prone to unfortunate incidents.

Faith includes knowing by heart, confessing by the tongue, practicing by all parts of your body.

38. The Manner of a Believer

A believer does not leave aside what is right, when in anger, and does not go astray, in happiness, and does not take more than he/she deserves, while in power.

39. The Stingy, The Envious, The Ruler, The Liar

There is no peace for the stingy, no pleasure for the envious, no guarantee for the rulers, and no conscience for the liar.

Doubt the faith of the one who shows off with his/her worships to Allah, since Allah Al-mighty abhors bragging about worship and appearance.

The Second Reason behind Islam's Quick Spread Round the World

As explained in the first part of the topic, Islam has spread much more quickly compared to other religions all over the world. The traits of Prophet Muhammad (PBUH&HP) were introduced as one of the reasons. Here, the effect of the scientific and social interactions with the rest of the world throughout the Islam's history is discussed.

As an introduction, it is good to know that Islam has adopted two types of regulations; confirmed rules and established ones. The Islamic approach regarding the confirmed rules -the regulations which existed before and were conserved or revised if needed- is one of the keys to the development and permanence of Islam. And, this will be the focus of this article.

Saying Yes to the Good Costumes throughout Islam's History

The Islamic approach to the habits and rules that were common in the pre-Islamic era was that it neither opposed them totally nor accepted them entirely. In some cases, Islam has affirmed and preserved some rules. That was when those rules or customs were not in contradiction to the social order and the living facilities of humans or in case of the righteous customs and traditions that existed before the emergence of Islam; e.g., some of the rules on making contracts.

However, some of the useful regulations required to be revised and this was accomplished by adding some conditions. On the contrary, some customs and routines were opposed and removed due to the bugs and disadvantages or because they were manipulated or misused for personal benefits; e.g., usury (Riba) [1].

The rules conserved by Islam, such as those about the ownership and property, are called confirmed rules. On the other hand, the rules instituted by the Islamic jurisprudence which never existed before are called established rules [1]. This demonstrates that Islam has always been in constant interaction with the world, and the positive aspects of human societies are considered. Hence, the message of Islam and its framework have not been far from what people are familiar. This consequently has made it easier to accept Islam.

Islam has urged everyone to seek knowledge. The first verse of the Quran revealed to Prophet Muhammad (PBUH&HP) enjoined reading which is the key to knowledge: “Read in the Name of your Lord who created” (96:1). Literacy and having knowledge are so important in Islam that Quran equals illiteracy to being in darkness. According to Prophet Muhammad (PBUH&HP), seeking knowledge is obligatory (Wajib) for every Muslim and God loves those who seek knowledge [2].

The Holy Quran also addresses the believers as those who are not affected by the wrong behaviors of others since they have been guided. So, the believers can peacefully learn from the positive aspects of others. Another proof of the attention paid to knowledge in Islam is that Muslims used to release the prisoners of wars who taught literacy to a certain number of Muslims. All these emphases and recommendations have urged Muslims to travel to gain knowledge. As a result, Muslims who traveled to other places and countries were practically the messengers of Islam there, which, in consequence, accelerated the spread of Islam.

Continuous interaction with the world During Islam's History

The actual advances all over the world are the outcomes of the efforts that various nations and civilizations have made in the course of time, among which are the Islamic civilizations [6]. Muslims in different countries, like Spain and Italy, have always been in interaction with other people; therefore, they could transfer the Islamic civilization and culture to others and also receive from them. As an instance, in the battle of the Trench (Khandaq), Salman Farsi proposed to dig a trench around Medina.

This was a tested strategy in Persia, and Prophet Muhammad (PBUH&HP) accepted it. Many of the important Arabic resources and books were translated into European languages, some of which were later on taught and used as references in scientific centers in non-Muslim countries. The bonds between Muslims and Christians through marriage [i] and social relationships were of other means to expose non-Muslims to Islam [7]. All these factors have helped the quick spread of Islam.

From what has been discussed, we can see that the Islamic approach of making regulations under the form of confirmed rules, the encouragement to obtain knowledge and literacy, and cultural exchanges with the rest of the world played significant roles in attracting many savants and people to the religion of Islam.

Notes:
[i] This kind of marriage named Interreligious marriage is permitted in Islam under the certain conditions.